Westmeath County Council recognises the importance of identifying, valuing and safeguarding our archaeological, architectural and cultural heritage for future generations and aims to do so by means of proper management, sensitive enhancement and/or appropriate development of this resource.

Westmeath has a rich and unique heritage of which we can be proud. Our cultural heritage is the legacy of past generations; it is part of our identity, and the distinctive character of where we come from. Tangible aspects of this cultural heritage include archaeological sites and monuments, vernacular structures, and historic buildings – the landscape indicators of our past. Intangible aspects of our cultural heritage include mythology associated with the County such as the story of the Children of Lír, An Táin Bó Cúailgne (the Cattle Raid of Cooley), links to historic figures and events, as well as language, folklore and place names. The vast array of archaeological, built, cultural and natural assets in the County are the cornerstone of our tourism product. In this regard, Cultural Heritage plays a significant role in attracting visitors to the County.

Our Archaeological heritage is characterised by the material remains of the past. Archaeological monuments include upstanding structures such as churches, graveyards, castles, ringforts and holy wells as well as sites that have little or no visible surface expression for example: -settlements, burials, fulachta fiadh, ditches and pits. County Westmeath boasts a wealth of archaeological monuments including the royal site of Uisneach, prehistoric barrow burials, wooden trackways, such as the Bronze Age road way at Mayne, earthworks, crannógs and ringforts. There are many fine examples of mottes (and baileys), tower houses, and several deserted medieval settlements. Our rich ecclesiastical heritage includes church and abbey ruins, graveyards, high crosses and holy wells, notable sites include those in Fore. Our archaeological heritage includes artefacts, the earliest of which are stone tools dating from the Mesolithic period (c.9,000 - 5,000 years ago). Some of the more famous artefacts found in Westmeath include gold ear-spools (from the Mullingar area), the Lough Lene Bell, the Balinderry Gaming Board and several Viking hoards.

The Urban Archaeological Survey for County Westmeath conducted in 1985 covers the areas of Ardnurcher, Athlone, Ballymore, Fore, Kilbeggan, Kilbixy, Mullingar and Athlone old town and identifies ‘Zones of Archaeological Potential’ within these settlements.

Archaeological remains provide valuable information about our past and the people who lived here before us. The archaeological resource is non-renewable – excavation of an archaeological site or feature results in its destruction and removal from its landscape setting.  Where new development is being considered, the archaeological potential of the site should be considered in the very earliest stages of planning by checking the National Monuments Service’s Archaeological Survey Database on https://www.archaeology.ie/.

In recognition of its exceptional archaeological and historical importance and the significant contribution which it can make to the tourist offering in North Westmeath, a Special Heritage Management Study has been prepared for Fore. The wealth of the archaeological and historical remains in Fore Village, together with the attractive landscape in which they are set mark this area out as one of national importance. Fore is one of the main tourist attractions promoted in Westmeath under the Ireland’s Ancient East brand. 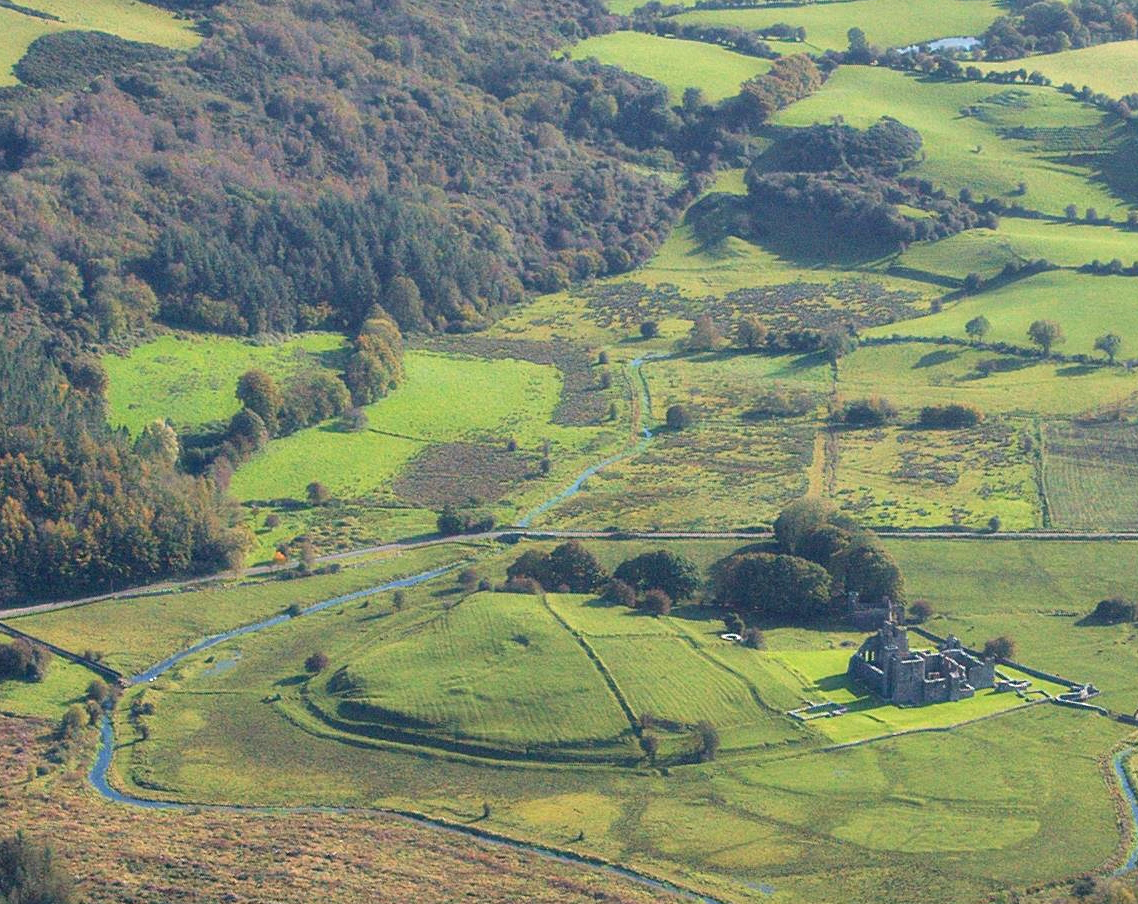 The Fore Special Heritage Management Study sets out objectives for the sustainable development of the village which are based upon the principles of protecting the intrinsic value of the historic, archaeological and natural heritage setting. In recent years, a number of looped walks have been developed at Fore, which are indicated in Volume 2. It is Council policy to protect the views from these looped walks.

The Hill of Uisneach is one of the most sacred and historic sites in Ireland renowned as an ancient meeting place in the centre of the country. Over 35 archaeological monuments are recorded on the Hill. These date from the Neolithic (c. 6,000-4,000 years ago) through to the medieval period, representing ceremonial, burial and settlement activity spanning several millennia. The Hill of Uisneach is on the tentative list (2010) for future nomination to the UNESCO World Heritage List as one of the five Royal Sites of Ireland. See also Section 13.3.9 of the plan in relation to Uisneach Landscape Character Assessment and High Amenity Area.

Westmeath has many significant built heritage sites and historic landscapes, including such well known examples as Tullynally Castle, Moydrum Castle and Belvedere House & Gardens. Along with fine historic houses, their associated demesne lands and follies, our architectural heritage includes vernacular buildings that reflect our rural traditions. In urban settings there are many areas of architectural significance, several of which have been designated Architectural Conservation Areas (ACAs), our historic towns, include the walled town of Athlone and planned towns, such as Castlepollard and Tyrrellspass. The army barracks in Athlone and Mullingar are noteworthy sites of built heritage significance, as are the variety of industrial heritage sites within the County, which include our canals, bridges, railways, mills and distilleries.

Part IV of the Planning and Development Act 2000 (as amended) requires planning authorities to include in their development plans, policies and objectives for the protection, enhancement and preservation of the built heritage in their functional area. The two principal mechanisms within this legislation for the protection of built heritage assets are by maintaining a Record of Protected Structures (RPS) and designating Architectural Conservation Areas (ACAs).

The Department of Arts, Heritage and the Gaeltacht’s publication Architectural Heritage Protection: Guidelines for Planning Authorities (2011) and Government Policy on Architecture 2009–2015, contain policy and advice for the protection of Architectural Heritage, including Protected Structures and Architectural Conservation Areas. The Department has also issued a range of publications under its Advice Series to provide more detailed guidance and advice on historic building materials and issues e.g. maintenance, access, windows, iron, and brickwork.

Each Local Authority has a legal responsibility to compile a Record of Protected Structures (RPS). Structures, or parts of structures, can be added to the Record if they are deemed of special architectural, historical, archaeological, artistic, cultural, scientific, social or technical interest.

A Protected Structure, unless otherwise specified, includes the exterior and interior of the structure, the land lying within its curtilage, any other structures and their exterior and interiors lying within that curtilage, plus all fixtures and features which form part of the interior or exterior of any of these structures. Curtilage refers to the parcel of land immediately associated with the Protected Structure and generally forms the boundary of the property ownership.

Large properties like country estates, institutional complexes, and industrial sites can have extensive grounds that contain a number of additional structures within their curtilage or attendant grounds which have a functional connection or historical relationship with the principal building. The location of these structures and the laying out of the lands were often deliberately designed to complement the appearance of the principal structure or to assist in its function. Therefore, the setting of a Protected Structure may contribute significantly to its special character. Any works that would materially affect or impact the character and setting of a Protected Structure require planning permission.

The Council encourages the sensitive upgrading of protected structures to improve environmental performance, energy efficiency and to adapt to the impacts of climate change. Applications involving a change of use, conversion, extension or other refurbishment of a Protected Structure will be required to demonstrate how environmental performance can be improved together with how the proposal seeks to adapt to climate change, reduce carbon emissions, improve resource use efficiency and minimise pollution and waste. For historic structures, simple measures such as draught proofing, energy and water efficient appliances, roof insulation and repair and maintenance work can bring substantial improvements and have minimal other impacts, both visually and on historic fabric and traditional construction.

An Architectural Conservation Area (ACA) is a place, area, group of structures or townscape that is of special architectural, historical, archaeological, artistic, cultural, scientific, social or technical interest or value, or contributes to the appreciation of Protected Structures, which may be included in a Development Plan where it is considered necessary to preserve its character. ACAs are chosen very often because they contain a group of historic buildings, have a distinctive street pattern or plot size which gives the area a distinct character and contributes to the town or village wherein it is located.

Most structures in an ACA are critical in how they positively contribute to the streetscape or character of an area. Within an ACA protection extends to the external appearance of such structures and streetscapes. Any such works that would have a material effect on the special character of an ACA require planning permission, even works that are usually considered Exempted Development under Section 4 of the Planning & Development Act 2000 (as amended). The Council shall seek to ensure that new development works within an ACA respect and enhance the special character of the area including the setting of protected structures, and comply with development management standards. The identification of new ACAs and/or the modification of existing ACAs may be proposed during the lifetime of the County Development Plan.

The ACAs within Westmeath are identified on the relevant settlement maps in the following settlements:

While these older buildings may not meet the criteria of sufficient special interest to be designated Protected Structures, their form, scale, materials and orientation contribute positively to the rural landscape as well as to the historic villages and towns.CH

There are many Historic Parks, Gardens and Demesnes in Westmeath. These planned landscapes are characteristic of 18th and 19th century settlement and are often the setting of a Protected Structure; e.g. the manor house, estate houses, gate lodges, walled gardens, outbuildings and enclosed yards and gardens. The National Inventory of Architectural Heritage (NIAH), includes a survey of Historic Gardens and Designed Landscapes. There are 225 demesnes or designed landscapes recorded in County Westmeath.

Belvedere House, Gardens and Park built c.1740 is one of the finest historic small houses in Ireland and is set in a planned 18th century landscape extending over 65 hectares. Given the architectural and cultural significance of Belvedere House, Gardens and Park and having regard to its status as the premier tourist attraction in the County, the Council is committed to ensuring that its future development is informed by a Conservation Management Plan. The preparation of masterplans for complex sites such as historic buildings and demesnes, in particular where there is a mix of cultural and natural features across a large area, is supported by the Council.

Industrial heritage refers to the physical structures which remain today from the industrial era of the late 18th century and following years. It includes railways, turnpike and coach roads, canals and their locks, distilleries, mills, hydraulic rams, the peat and quarry industries. An inventory of Industrial Heritage Sites in Westmeath was compiled in 2019 and this included an outline history of the development of industry in the County. Based on cartographic and historical information, the inventory identified 4,855 industrial heritage sites in the county and this information will inform future surveys and planning decisions.

The use of the Irish language as part of everyday life is encouraged and the Council has an important role to play in the promotion of the language in the County. The Development Plan can support and provide land-use and spatial dimensions to promote and protect the linguistic and cultural heritage of the area. The Council will continue to support initiatives at County level to strengthen bilingualism in the County.

5 submissions have raised observations relating to this chapter

View graphs and filter submission data for this consultation